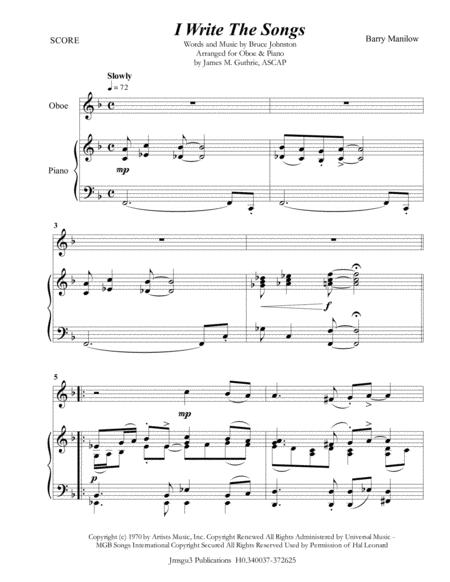 Duration: ca. 3:00, score: 5 pages, solo part: 1 page, piano part: 2 pages.Very famous song suitable for church, recital or nightclub. "I Write the Songs" is a popular song written by Bruce Johnston in 1975 and made famous by Barry Manilow. Manilow's version reached number one on the Billboard Hot 100 chart in January 1976[2] after spending two weeks atop the Billboard adult contemporary chart in December 1975.[3] It won a Grammy Award for Song of the Year and was nominated for Record of the Year in 1977.[3] Billboard ranked it as the No. 13 song of 1976.[4]

The original version was recorded by The Captain & Tennille, who worked with Johnston in the early 1970s with The Beach Boys. It appears on their 1975 album, Love Will Keep Us Together. The first release of I Write the Songs as a single was by then teen-idol David Cassidy from his 1975 solo album The Higher They Climb, which was also produced by Bruce Johnston. Cassidy's version reached #11 on the UK Singles Chart in August of that year.[5]

Johnston has stated that, for him, the "I" in the song is God,[2] and that songs come from the spirit of creativity in all of us. He has said that the song is not about his Beach Boys bandmate Brian Wilson.[6]

Manilow was initially reluctant to record the song, stating in his autobiography Sweet Life: "The problem with the song was that if you didn't listen carefully to the lyric, you would think that the singer was singing about himself. It could be misinterpreted as a monumental ego trip."[3] After persuasion by Clive Davis, then president of Arista Records, Manilow recorded the song, and his version of "I Write the Songs" was the first single taken from the album Tryin' to Get the Feeling. It first charted on the Billboard Hot 100 on November 15, 1975, reaching the top of the chart nine weeks later, on January 17, 1976." Wikipedia