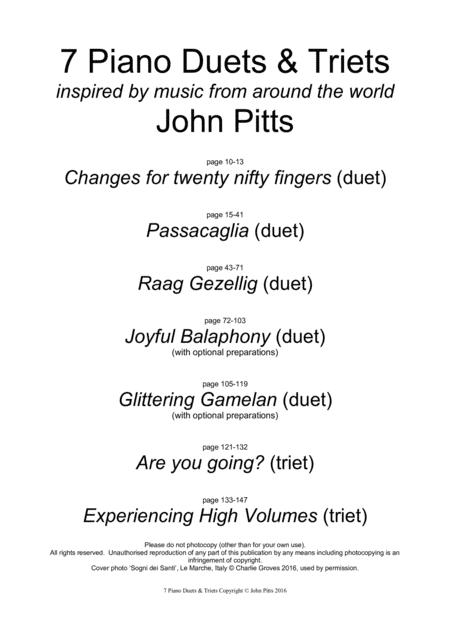 Welcome to this collection of 5 duets and 2 triets.

These 7 piano pieces were written between 1995 and 2015 for performers in UK, France and Denmark. They have the connecting thread of each being inspired by music of a different country. Four of the pieces have roots in traditional music - Indonesian gamelan, North Indian sitar raags, African balaphon ensembles, and British folksong – and the other three were inspired by German organ music (J.S.Bach), American minimalism and Spanish waltz (although it doesn’t sound like it!).

Between them, they have been performed in festivals, concerts and international piano duo competitions in UK, Spain, France, Netherlands, Germany, Austria, Poland, Denmark, Norway, Estonia, Russia, Ukraine, Armenia and USA.

Most of the pieces are cheerful, vibrantly rhythmic and highly energetic, as well as requiring considerable dexterity.

This is the ‘simplest’ piece of the collection, and the oldest. I wrote it during my undergraduate years at Bristol University in response to a task set by my then composition tutor Wyndham Thomas. The given title "Changes" refers to the inspiration of the peeling of church bells – ringing the changes - where there is a simple ostinato pattern that undergoes a gradual metamorphosis. This piece starts with the skeleton of this short repeated phrase (in 14/8) which gradually fills out, and then moves through two enormously tricky sections of phasing - in which the two pianists have overlapping bars of different lengths (14 and 15 quavers). The duet finally builds to a dramatic climax in the third minute. So, this is a short minimalist piece, ultimately with its technical roots in American minimalism, although the material was more immediately inspired by the piano style of my older brothers, in particular my eldest brother Antony’s piano solo piece Dance of the Redeemed Creation - the style of which can be traced in many of my piano compositions.

Changes has been widely performed by the Kiev Piano Duo (Dmytro Tavanets and Oleksandra Zaytseva), and a recording (performed by Steven Kings and John Pitts) is available on CD “7 Airs & Fantasias and other piano music” from www.johnpitts.co.uk - or as a download from Hyperion/1equalmusic: www.hyperion-records.co.uk/dc.asp?dc=D_1EMIPM08

This piecealso exists in versions for organ (my original version in 2000) and orchestra(performed by Bristol University Symphony Orchestra under the baton of JohnPickard in 2001). The piano duet version was finally completed in2012.

The theme isbased on the ground bass from Bach’s stonking Passacaglia in C minorfor organ. However, the implied harmonies of Bach’s original ground bass aretreated to some "twisted harmonies" – where each chord is alteredusing a system of harmonic substitution - swapping each chord implicationfor a newly chosen one (Cm=C, Fm=F#, G=A, Dm=A¨, Eb=F and on it goes around the 12chromatic notes).

Each keytherefore has a ‘dominant’ and ‘subdominant’ that are not the actual chords Vand IV in that key, so the traditional cadences and chord relationships aresupplanted by 12 individual 3-chord relationships – one set of three chords foreach of the 12 (now almost exclusively major) keys. In an attempt torecreate the pulls of the traditional tonic-dominant-subdominant relationships,each key then also has a particular mode/scale with particular added notes thatare designed to recreate the sense of moving away from and back towards thehome chord of that key. This results in a lot of rich added harmonies andsome idiomatic voice-leading.

Bach’s original theme in Cm is:

and in the opening statement of the ground bass this has become:

There are then 21 variations which modulate through a range of keys, duringwhich the ground bass is constantly re-adjusted to fit the new harmonicareas. It starts in C major, then goes through ‘closely’ related keys (egA major and A¨ major), and then back to C in variations 6, 9 and 11. This kindof arch then happens again but going through more distant keys before returningto C in variations 18, 19 and the final climactic variation 21.

Leaving aside the structural and tonal nuts and bolts, my aim was to compose apiece that attempts to recapture some of the nobility and beauty of Bach's Passacaglia, with rich added noteharmonies, and exuding an exuberant joy.

Raag Gezellig was composed at the request of French duo Mark Solé-Leris and FrédéricChauvel as the compulsory contemporary work for the sixth International Piano 4Hands Competition 2011 in Valberg, France.  'Gezellig' is a Dutch word with no preciseEnglish translation—the closest is probably 'cosy'—as in atmosphere (forexample, with friends and a glass of wine around a fire).  I've always liked the word and it seemedappropriate for an intimate piano duet.  Thepiece becomes increasingly virtuosic—designed to test the professional duos'technical and musical skills to their limits—and stylistically draws heavilyfrom the classical sitar raag (or raga/rag) tradition ofPakistan.

While Raag Gezellig is entirely through-composed, a traditionalsitar raag is a semi-improvised form within a structure of three (orarguably four) sections:

Raag Gezellig opens and closes with a gentle cascade, imitatinga typical raag’s opening gesture - a descending glissando of the sitar’ssympathetic strings. The rhythmically-free and quasi-improvised melody of thepulseless Alaap actually requires some rather complex-looking rhythmicnotation - western notation is designed for music with a regular beat! The regular pulse and tala - aseven-beat rhythmic cycle - are introduced in the Jhor section, when youalso hear the gat for the first time. One important feature is the tihai- where short phrases (of various lengths) are repeated three times beforelanding heavily on sam (beat 1 of the tala). There are numerousexamples. The second gat is related to the first gat but with afaster tempo and different tala (seven quaver beats rather than sevencrotchet beats). The final Jhala-inspired section gets going shortlyafterwards at the same faster tempo.

This duet wasinspired by some traditional music from Burkina Faso in sub-saharan Africa - ensembles of balafons and djembes(hand-carved xylophones and drums).

The music is verypercussive, obviously, with driving, pounding rhythms. Like a lot of other traditional musics, thisafrican folk music is modal, and its timbres - the sounds - are both sweet andalso unrefined.

There are someoptional piano preparations which attempt to capture some of the exoticsoundworld.

A short duetcomposed as an encore for Danish/British duo Ingryd Thorson and Julian Thurberfor a concert in the 2014 Samsø Piano Festival, Denmark, which includedthree other duets in this collection.

It was inspired bya particular type of gamelan music from Indonesia - "GamelanBalaganjur" - which translates as "Gamelan of Walking Warriors".This style of music has its historical origins in military music - music usedin battle. These days it is performed in Indonesia in competitions by largebands of dancing musicians, with pitched and unpitched percussion. Their musicis incredibly elaborate, and has very little repetition. It involves constantly changing speeds withlayers of complex rhythmic gestures that require very impressive ensembleskill.

This duet is quitenoisy, especially if you use the optional piano preparations.

This is somewhatminimalistic, and polyphonic between the three players. It includes a number ofsections in which the tempo of one of the pianists gradually speeds up or slowsdown while the others keep a steady pulse. Like Raag Gezellig it is in 7 beats per bar, but unlike Raag Gezellig it is fast throughout. Thetheme is the English folk-melody Are yougoing to Scarborough Fair.

This is pleasant,relaxing armchair music, which doesn’t actually get particularly loud. I have Francisco Tárrega (1852-1909) to thank for a motif that recurs throughthe piece – a short section of his "Gran Vals", which you mayrecognise. I have omitted the last noteof the original melody, which is actually an octave down from a more familiarversion you may know. Before this motifmade its way into this piece I had considered a title along the lines of Cycleof Thirds for harmonic reasons which may be obvious. But I put that idea permanently on hold aftertrying to get through to a utilities company. In retrospect, I should have ensured that the end looped neatly back tothe beginning (which sadly it doesn’t quite), so that I could attempt to sell arecording of this piece to businesses for their call waiting music.

John Pitts is a British composer and teacher living in Bristol. He studied at Bristol and Manchester Universities, and composes mostly chamber music, especially for piano solo/duet/duo/triet – stylistically melodic, motoric, motif-driven, folk-inspired, jazz-tinged, post-minimal impressionism. His virtuosic pieces for two pianists (7 Piano Duets& Triets inspired by music from around the world and Gaelic Faram Jig in Kiev) have been performed at concerts, competitions and festivals in ten European countries, plus Armenia, Australia, Russia, Ukraine and the USA, including in 2015 a concert dedicated to his music in Perpignan Conservatoire's Festival Prospective 22ème siècle. His Piano Quartet won the 2003 Philharmonia Orchestra MMSF Composition Prize at the Royal Festival Hall. His 2009 album Intensely Pleasant Music: 7 Airs & Fantasias and other piano music, performed by Bristol's Steven Kings, received “delicious” reviews. In 2016 John completed an unusual 258-page book How to Play Indian Sitar Raags on a Piano for adventurous pianists - see www.pianoraag.com. Secretary of Severnside Composers Alliance (2003-2015); Associate Conductor of Bristol Millennium Orchestra (2010-2016).