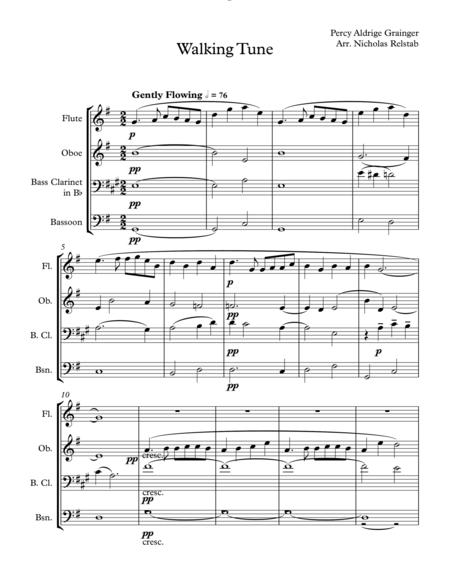 Walking TuneIn the summer of 1900, an eighteen year old Grainger vacationed in the Scottish Highlands. Hikes through the breath-taking mountains and lochs of the countryside of West Argyllshire, combined with the rich accents and swirling tartans of the Scots and the strident sounds of the bagpipes, contributed to the conception of the melody of the Walking Tune. Originally scored in 1905 for a wind quintet, Grainger eventually scored it for it for the Wind-Choir of the Cincinnati Symphony in 1940. This composition has many of the lyric fragments that would be developed more fully in Grainger’s later masterpieces.About Percy Grainger Percy Grainger (1882 -1961) was a picturesque nationalist who tried to retain something of the original flavor of British folk songs and their singers by strict observance of peculiarities of performance, such as varying beat lengths and the use of “primitive” techniques such as parallelism. Born the son of an architect in Brighton, Victoria, Australia, Percy Grainger was a precocious pianist, and the proceeds of a series of concerts, given at the age of twelve, enabled him to study at Frankfurt for six years. After that, he began his European career as a concert pianist, settling in London in 1901. He came to the U. S. in 1915 and enlisted as an army bandsman at the out­break of World War I. He became a United States citizen in 1919. It was during his stay in England that he became passionately involved in collecting and arranging folk songs and country dances. It has been related that “Percy never had the slightest hesitation in pumping anybody he came across. He would go up to a man ploughing and ask him if he knew any songs and as often as not the man would stand for a minute or two and sing him a song in the most natural way in the world.