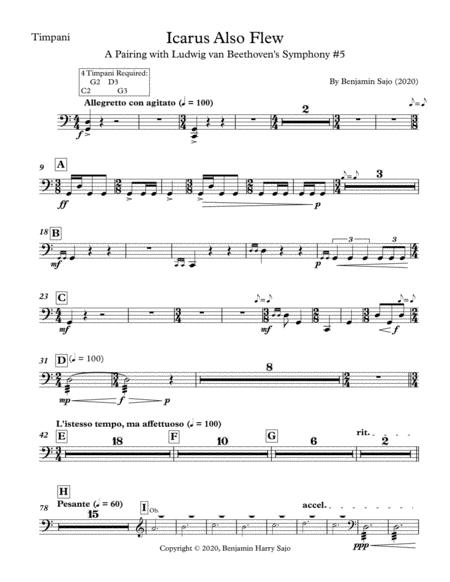 Icarus Also Flew takes its title from the first line of the poem "Failing and Flying" by Jack Gilbert. He is referring to the classical myth of Daedalus and Icarus, an inventive father and son who bravely escape from their imprisonment in a tower by collecting the disposed feathers of seabirds, then fashion wings out of them and fly away. While the story is often treated as a morality tale--”listen to your elders”, “don’t get cocky” like the young man, Icarus, who, in such an understandable state of elation, ascended too close to the sun thus causing the wings to melt and his tumbling to his Mediterranean death--what Jack Gilbert reminds us is how regardless of one’s failure, the sheer transcendental experience of mortal flight remains glorious and unforgettable. Icarus’s fall was not into a legacy of disdain and oblivion, but in truth, he had “come to the end of his triumph.”

This piece was the first of a series I composed during the Covid-19 quarantine conditions of 2020, to serve as potential contemporary preludes for each of Ludwig van Beethoven’s nine symphonies--his two hundred and fiftieth anniversary was this year!--though they can all stand on their own on any program. The connection, in this case, is with his celebrated fifth symphony in C minor--the “Fate” symphony, as it is commonly known. I’ll let the listener find their own connections.

Benjamin Sajo (b. 1988) is a Canadian composer of contemporary classical music, as well as an educator. Since developing a fiercely independent creative voice upon the completion of his studies at Western (2010) and McGill Universities (2013), he continues to find inspiration from the intersection of mythology, art, and nature upon the contemporary human experience. In 2019, he released his premiere album of original music, The Great War Sextet: Canadian War Poetry with Trombone & Strings, with support from the Ontario Arts Council. He is a member of SOCAN and the League of Canadian Composers.