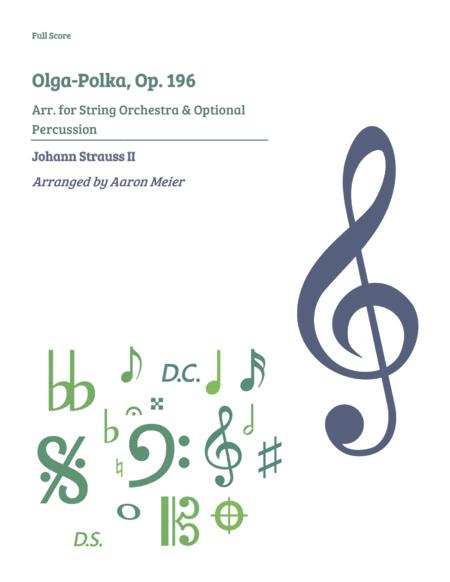 True to the original work by Strauss, thisreduction for string orchestra features the ornaments and mystical writing thatdefines Strauss' polkas. There are optional percussion parts to be added at thediscretion of the ensemble, however even without percussion the ensemble willsound full (the percussion acts as an ornament).

The Olga-Polka itselfowed its creation to a Russian royal wedding which took place in St. Petersburgon 28 August 1857. On that day, amid accompanying splendour, the music-lovingGrand Duke Michail Nikolaievich (1832-1909), youngest brother of Tsar AlexanderII, married Princess Caecilie of Baden (1839-91), daughter of Archduke Leopoldof Baden. Johann Strauss, who at that time was giving a summer season ofconcerts in nearby Pavlovsk, used the opportunity occasioned by the event toenhance his already enviable popularity with the Russian royal family andcomposed the Caecilien-Polka in honour of the lovely young bride. Indeed, it isclear from a letter which Johann wrote in late July 1857 to Carl Haslinger, hispublisher in Vienna, that the new polka had been prepared well in advance ofthe wedding (the fair copy of the full orchestral score made for the publisher'sengraver is dated 9 August) and was enjoying success even before the royalcouple's official engagement on 16August 1857. Sometime after performing theCaecilien-Polka in Pavlovsk, Johann despatched the work to the Austrian capitalwhere his brother Josef conducted its Viennese première, together with that ofJohann's waltz Telegraphische Depeschen (op. 195, Volume 28), at his ownbenefit concert in the Volksgartenon Sunday 18 October 1857. The WienerAllgemeine Theaterzeitung (16.10.1857) remarked that both works "havecaused a sensation in St. Petersburg and are truly genial Viennese sounds fullof verve and melody".

Since traditiondemanded that the German Princess Caecilie adopt a Russian name - OlgaFeodorovna - before her marriage, so Johann's Caecilien-Polka also underwent achange of identity. On 8 December 1857 Carl Haslinger announced the publicationof Strauss's Olga-Polka, on the title page of which is the inscription:"Dedicated to her Imperial Highness Grand Duchess Olga, née Princess ofBaden". It was under this title, too, that Johann himself first conductedthe work in Vienna at a concert in the Volksgarten on 1 November 1857, shortlyafter his return from Russia. Reporting on this event, the Wiener AllgemeineTheaterzeitung (3.11.1857) observed: "The 'Olga-Polka' is a mostdelightful, fragrant musical bouquet, full of fine, graciousrhythms".
[excerpted from NAXOSRecords]
Kemp, Peter."Program Notes - About this Recording." NAXOS, 1993, www.naxos.com/mainsite/blurbs_reviews.asp?item_code=8.223232&catNum=223232&filetype=About%20..........Accessed 5 June 2020.

• Visitsites.google.com/view/aaronmeier for more information regarding thisarrangement and other works.
• Find a full midi recording of this arrangement on YouTube: www.youtube.com/watch?v=829a_VI5MaI
• Other arrangements by Aaron Meier on Sheet Music Plus: www.sheetmusicplus.com/publishers/aaron-meier/16937