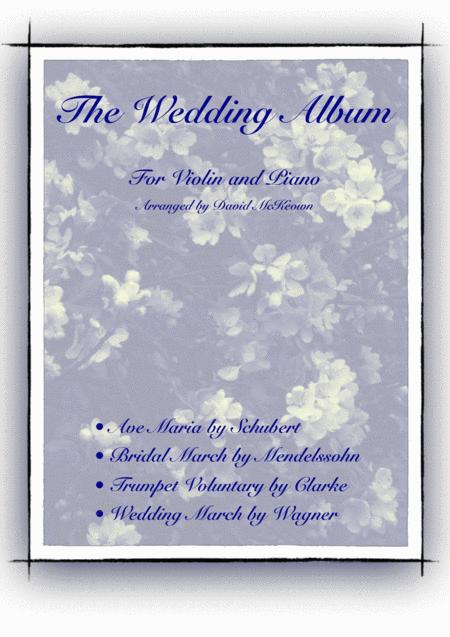 The Wedding Album is a collection of four beautiful and timeless wedding favourites, arranged for Solo Violin with Piano accompaniment. Whether for that Special Day, for a recital, or for your own entertainment, these arrangements are ideal for players at an intermediate level or higher. The 24-page file includes the piano accompaniments and the separate solo parts at the end.

Ave Maria was written by Franz Schubert in 1825 as the sixth song in his song cycle based on Walter Scott’s poem The Lady of the Lake. It is perhaps the best known of all his melodies, adapted for piano by Franz Liszt, and for orchestra many times since. It is often sung with the Latin lyrics of the Catholic hymn of the same name and has been heard everywhere from the Disney movie Fantasia to the funeral of J.F. Kennedy.

The Bridal March was written by Richard Wagner in 1850, scored for orchestra and chorus, and opening the third act of his opera, Lohingren. It is best known in the English-speaking world as “Here Comes the Bride”. Queen Victoria’s daughter used the music for her marriage in 1858, and its popularity has endured ever since.

The Prince of Denmark’s March is better known nowadays as the Trumpet Voluntary and is often used in wedding ceremonies. It was in fact written for organ, with the melody played on the“trumpet stop”.  Written around 1700, for many years this piece was mistakenly attributed to Henry Purcell. Only recently has it been established that the composer was Jeremiah Clarke, organist at St Paul’s Cathedral. It is somewhat ironic that this composer of a wedding mainstay was himself a victim of unrequited love. He consequently shot himself in the cathedral graveyard.

Felix Mendelssohn’s Wedding March was originally written in 1842 as incidental music to Shakespeare’s famousplay, Midsummer Night’s Dream. When Queen Victoria’s daughter used the music for her marriage in 1858, it became instantly popular and has remained a wedding favourite ever since.

These four arrangements are also available as single titles for $3.99 each. You can find these along with many more top quality arrangements and compositions by David McKeown at http://www.sheetmusicplus.com/publishers/david-mckeown/6203