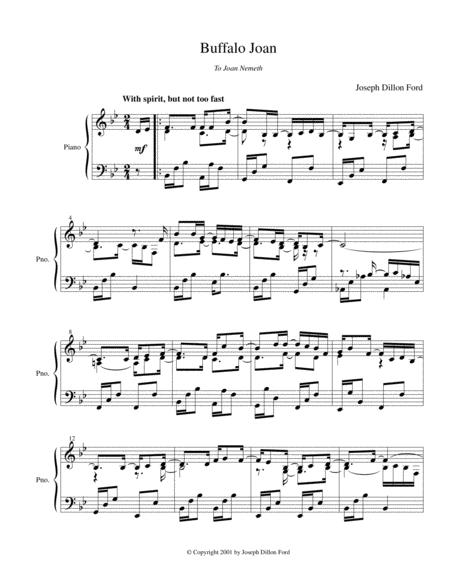 This "Country Tune" was composed many years ago primarily for my own amusement, although the lyrics weren't written until I prepared these songs for publication in 2001. It is music of the popular sort I occasionally heard on the radio when I was a young man, with singable melodies and guitar-like accompaniments. It would be a shame if anyone took it too seriously, but it is not without a certain charm which I hope recommends them to both singers and audiences in search of new, lighter fare.
The song owes its inspiration to my friend, Joan Nemeth, who resides in Yellowstone County, Montana, and was the unwitting but forgiving subject of my fictitious—though not entirely inaccurate—lyrical narrative. The song concludes with a long coda for the piano based on new material.
Words of the original song:
Yellowstone Joan
She was workin' in Atlanta, fillin' out forms and answerin' phones,
And dodgin' rush-hour traffic day by day,
And by the time she made it home she only felt like layin' down to cry,
'Cause the music in her heart was slowly dyin'.
She fell asleep and dreamed she saw a stream of golden light,
That flowed towards the shores of her old Montana home.
Though the hour was dark she knew the day would soon dawn brighter than before.
When it did she packed her bags and said, "I'm movin'."
There's a place beside the river with just the bare necessities—
A well and pump and an old pot-bellied stove,
But miles and miles around the air is filled with Mother Nature's symphony,
And the big sky rises up as far as heaven.
Just listen closely and you'll hear her voice across the plains:
At last I've come home and I'll never leave again!
Even though times can get tough and I don't have a single luxury,
Here I'll stay, the mighty Yellowstone still calls me.
The sound sample is an electronic preview﻿