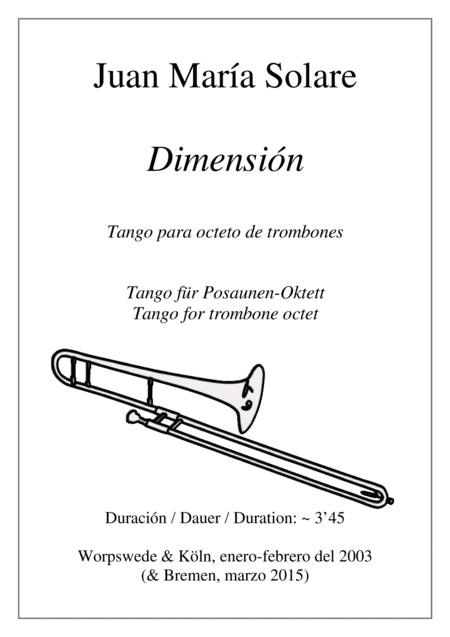 Dimensión is a tango that wascomposed based on two simple piano pieces destined to young pianists: the firsttheme is "Langostango" andthe second one "Continuando".When joining to build up "Dimensión",additional elements came into the game, such as an important secondary melodyand a few transitions.

Dimensión is therefore a clearexample of a successful composition: a couple of good ideas and a lot of workto achieve that nobody notices how much work lies behind it.

About the title, it obeys to my (slightly excessive) concerntowards finding names that can be understood in any language of the places Iusually am related to (i.e. in Spanish, English and German). In the case of "dimensión"it is a transparent word, understandingas such the words that are practically identical in any language while keepingtheir meaning (there exist words that are quite similar in different languages,but mean different things, in Linguistics these are called false friends.) Among my titles one finds several of such transparent words.

In September 2002 I began to conductthe Orquesta No Típica at theUniversity of Bremen, Germany, a chamber group of variable instrumentationdevoted to tango music. Dimensión wasthe first piece that I composed especially for this group, in January /February 2003. The original version of Dimensiónis therefore for Sextet: flute, clarinet, violin, guitar, bass,piano.

Sincethat first version (performed several times in Germany and Argentina) I wrote along dozen of arrangements for different instrumental groups.

It is extremely interesting to read their eight feedbacksabout this piece and how they saw this piece so differently:

1)Interesting composition. Some difficult range issues. And the piece does notseem to go anywhere nor reach any conclusive direction. It has the same ideasand texture throughout.

2) Good melodic and rhythmic ideas and gooduse of all 8 trombones. Tenor ranges are good, but I would like to seethe bass trombone more in lower range.

4) The namefits with the piece since the overall tempo is not altered, bringing to thelistener the impression of one specific “dimension” even with the contrastingtonalities (minorXmajor). I believe some of the high range parts that are inaccompaniment and harmonic function, in a live performance, can be extremelyhard for the intended effect (ex: m. 14-18…etc). One can see that the idea isto have a constant (simplist) rhythm as an accompaniment, but I believe theparts that are accompanying could have more expression. Good themes! I miss a“particular language”, it really reminds me Piazzolla in a lot of parts, but itmaybe should bring new information along with the intended mood? Congrats and thanks for writing forthe low brass.

6) Superpiece for the audience, they will love it. But I think for this competition isa bit simple and light.

8) I likethis piece. You’ve done a nicejob of passing around the parts as to take good advantage of theinstrumentation. The ending of the piece feels a little abrupt to me. I wouldalso like to hear more of the “A” section before the “feel” changes. Nice job!﻿