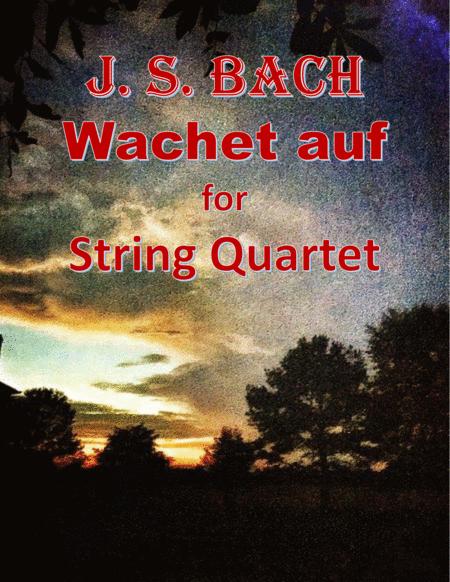 Wachet auf, ruft uns die Stimme (Awake, the Voice is calling us) from Cantata BWV 140. Duration: ca. 4:20, Score: 10 pages, Program this for church services during the Easter season, weddings, or as a recital encore.

(Awake, the Voice is calling us) also known as: Sleepers Awake

Bach composed his church cantata Wachet auf (BWV 140) as part of his second annual cantata cycle covering the entire annual church calendar. It is based on the hymn of the same name by Philipp Nicolai (1599). The hymn text covers the readings for the 27th Sunday after Trinity. Bach designed the cantata in seven movements, setting the stanzas in various forms. Among these forms are the chorale fantasia, the chorale prelude, and a four-part chorale. He casts the new lyrics as recitatives – in a manner similar to the opera.

Bach writes the fourth movement, Zion hört die Wächter singen (Zion hears the watchmen singing), in the style of a chorale prelude with the chorale phrases performed as a strict cantus firmus. The phrases seem to enter at times erratically against the famous lyrical melody. The violins play this melody in unison as a foil against the cantus phrases. The violin melody is so independent and complete that when the cantus melody appears it catches the listener at times totally off-guard. Bach later transcribed this movement for organ (BWV 645). This transcription became No. 1 of the Six Schübler Chorales.