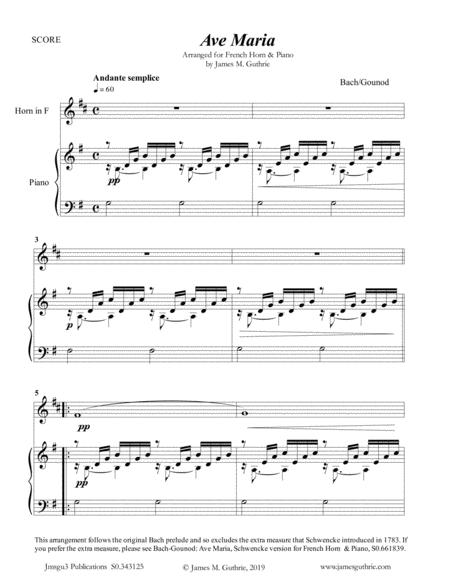 This arrangement follows the original Bach prelude and so excludes the extra measure that Schwencke introduced in 1783. If you prefer the extra measure, please see Bach-Gounod: Ave Maria, Schwencke version for French Horn & Piano, S0.661839 . The convenient 1st & 2nd endings provide an option for extended performance with minimal page turns for the accompanist. The duration with repeat is about 4:50. Score: 6 pages. Solo part: 1 page, piano part: 4 pages. Based on Prelude #1 in C Major from the Well-Tempered Clavier, Book 1. Well suited for church meditations or school programs or recital encores.Register for free lifetime updates and revisions at www.jamesguthrie.com

Ave Maria is a Catholic prayer that consequently asks for the mother of Jesus (Mary) to intercede. Charles Gounod composed a famous version of the Ave Maria. He was a French Romantic composer who overlaid a new melody on an existing Bach chord progression. The progression is from Bach’s Prelude No. 1 from Well-Tempered Clavier I. This version, as well as Schubert’s version, have become essential items at weddings, masses, and funerals.

Bach came from a long line of musicians and above all, composers. Consequently, he, first of all, pursued a career as a church organist. So as a result, he gained employment in various Protestant churches in Germany. For a while, he worked as a court musician in Weimar and Köthen. Here he probably developed his organ style and likewise his chamber music style. Eventually, he therefore, gained an appointment as Cantor of St. Thomas in Leipzig. Here he worked until difficulties with his employer ultimately drove him away. The King of Poland finally appointed him as court composer.