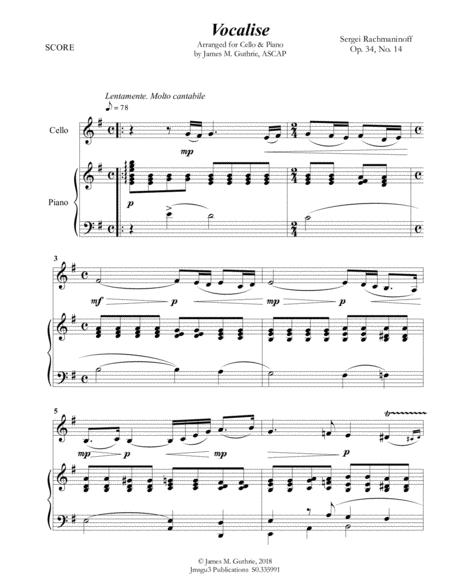 Vocalise is a song that Sergei Rachmaninoff in fact composed 1915. It represents, as can be seen, the final entry of his 14 Romances, Op. 34. He wrote it generally speaking for high voice with piano accompaniment. There are no words, but with this in mind, it is usually sung on a vowel that the singer chooses.  He provided a dedication by and large to the famous soprano Antonina Nezhdanova.

Sergei Rachmaninoff (1873 –1943) was a famous Russian concert pianist, and in fact also a composer, during the Romantic period. Some of his compositions are in short among the most famous in the entire Romantic repertoire. Rachmaninoff was born into a musical family on the whole and began studying the piano at only four years of age. In due time, he graduated from Moscow Conservatory in 1892. By then, he had in essence already composed several works for piano and a few orchestral pieces as well.

However, in 1897, music critics reacted negatively to his first symphony.  As a result, Rachmaninoff was clinically depressed for four years. During this time, he composed very little.  Eventually, successful therapy allowed him to complete his Piano Concerto No. 2. In contrast, it was ardently received by the critics. Rachmaninoff conducted at the Bolshoi Theatre, then eventually relocated to Dresden, Germany. During this time, he first toured the United States.

Rachmaninoff and his family meanwhile left Russia following the Russian Revolution in 1918. They settled, to begin with, in New York City. He performed on the piano and by and large conducted performances of his music for a living.  For a while, his busy tour schedule meant he had, on the whole, no time to compose. In fact, between 1918 and 1943, he finished just six works, including Rhapsody on a Theme of Paganini, Symphony No. 3, and Symphonic Dances. Generally speaking, he moved to Beverly Hills in 1942 for health reasons. Rachmaninoff was granted American citizenship ultimately one month before he died.

In Rachmaninoff's compositions, we see all in all the early influences of Tchaikovsky, Rimsky-Korsakov, Balakirev, Mussorgsky, and other Russian composers. These influences, in any event, seem to relinquish to his personal style of melodicism and orchestral color. Rachmaninoff obviously highlighted the piano often in his works.  In essence, he employed his pianistic skills to explore the more sensitive potentials of the instrument.

Register for free lifetime updates and revisions of this product at www.jamesguthrie.com.