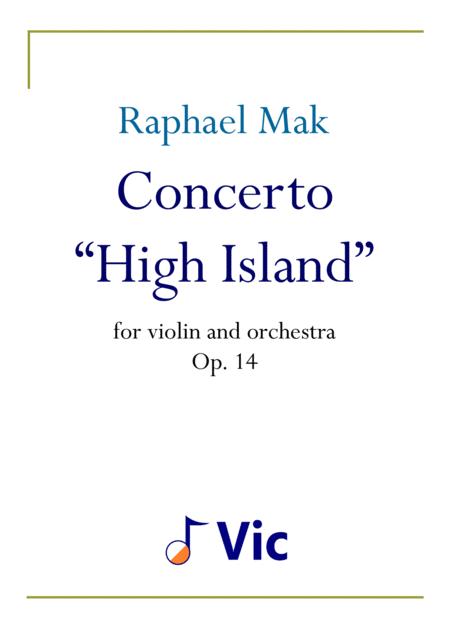 High Island is an island in Sai Kung, Hong Kong. The island gave its name to High
Island Reservoir, which was formed by constructing gigantic dams across Kwun Mun
Strait between the island and Sai Kung Peninsula, thus closing the strait off, then
pumping out all the sea water out of it and filling it with fresh water. Thus the island is
now connected to the peninsula by the dams. The vicinity of the reservoir is sparsely
populated and provides numerous leisure opportunities, such as hiking and water
sports.
The idea of writing a violin concerto was conceived in early 2009. An early draft was
written but deemed unsuitable for a violin concerto. The work was started all over
again in November 2009. During a trip to the High Island Reservoir, I was captured
by the breathtaking scenery there, and I decided to name the concerto High Island.
This concerto is largely inspired by the beauty of nature of Sai Kung Peninsula, and is
in summary an ode to nature. Like the earlier Sonata for Flute and Piano, this
concerto makes heavy use of the Chinese pentatonic scale. The violin concerto was
finally completed in September 2010.
The first movement starts with a mighty introduction based on the traditional
Cantonese tune Sim Yuen Jung Sing (Temple Chime), ignited by the timpani and
quickly built up through imitation. It shows the scene of the sun rising behind the
large concrete blocks of the sea wall at the east dam of the reservoir. Then all of a
sudden the solo violin appears, sweeping all other sounds away. The primary theme
follows, which is flowing and reminiscent of the Sai Kung landscape. The secondary
theme is calm and gives space for mediation. The exposition ends with the triumphant
reappearance of the primary theme, leading to the stormy development. After a
cadenza based on the previous themes, the recapitulation is heard, with a relatively
brief reappearance of the primary theme and the introduction. The reappearance of the
secondary theme is sorrowful yet thoughtful. The movement ends with the winds
rising and falling quickly, the sustained bass leading to the second movement.
The second movement is an immense expression of beauty of nature. The quiet
vibrato on the strings open the movement, and we can hear excerpts from the tune
Zhaojun Yuan (The Sorrow of Lady Wang Zhaojun) played by the woodwinds. This
leads to the sorrowful main theme. The solo violin is later joined in by the lines of
other wind instruments. The melody in the middle section is freely flowing, and is
reminiscent of folk music. The harmony augments the feeling of natural solitude,
resulting in an expressive ode to nature. The first section returns in the deep, leading
to the coda in major key, and the excerpts from Zhaojun Yuan are heard again. A trill
© Raphael Mak 2010
on the solo violin leads to the third movement.
The third movement is a rondo. The theme is lively, portraying the vividness and joy
of leisure activities in the countryside. The first episode is playful, continuing the
vividness of the theme. The light reappearance of the theme leads to an outburst of
passion praising, again, the beauty of nature. Running figures give the impression of
trickling streams. The second episode gives a pastoral feeling of villages and fields,
leading to the triumphant appearance of a motif from the main theme, but quickly
subsides, and the thoughtful secondary theme from the first movement reappears. The
third episode is quick and wild, after which a short cadenza leads to the reappearance
of the theme in full force. The coda pushes the music even livelier and ends the
concerto in triumph.
The movements in this concerto are marked to play attaca, but this is not strictly
necessary, and each movement can be played in isolation.