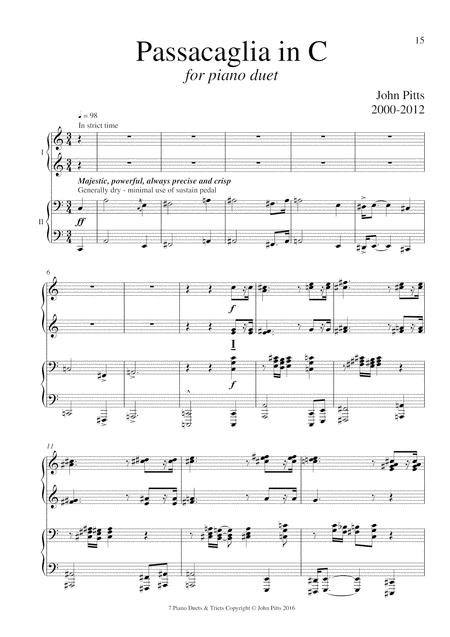 This piecealso exists in versions for organ (my original version in 2000) and orchestra(performed by Bristol University Symphony Orchestra under the baton of JohnPickard in 2001). The piano duet version was finally completed in2012.

The theme isbased on the ground bass from Bach’s stonking Passacaglia in C minorfor organ. However, the implied harmonies of Bach’s original ground bass aretreated to some "twisted harmonies" – where each chord is alteredusing a system of harmonic substitution - swapping each chord implicationfor a newly chosen one (Cm=C, Fm=F#, G=A, Dm=A¨, Eb=F and on it goes around the 12chromatic notes).

Each keytherefore has a ‘dominant’ and ‘subdominant’ that are not the actual chords Vand IV in that key, so the traditional cadences and chord relationships aresupplanted by 12 individual 3-chord relationships – one set of three chords foreach of the 12 (now almost exclusively major) keys. In an attempt torecreate the pulls of the traditional tonic-dominant-subdominant relationships,each key then also has a particular mode/scale with particular added notes thatare designed to recreate the sense of moving away from and back towards thehome chord of that key. This results in a lot of rich added harmonies andsome idiomatic voice-leading.

Bach’s original theme in Cm is:

and in the opening statement of the ground bass this has become:

There are then 21 variations which modulate through a range of keys, duringwhich the ground bass is constantly re-adjusted to fit the new harmonicareas. It starts in C major, then goes through ‘closely’ related keys (egA major and A¨ major), and then back to C in variations 6, 9 and 11. This kindof arch then happens again but going through more distant keys before returningto C in variations 18, 19 and the final climactic variation 21.

Leaving aside the structural and tonal nuts and bolts, my aim was to compose apiece that attempts to recapture some of the nobility and beauty of Bach's Passacaglia, with rich added noteharmonies, and exuding an exuberant joy.