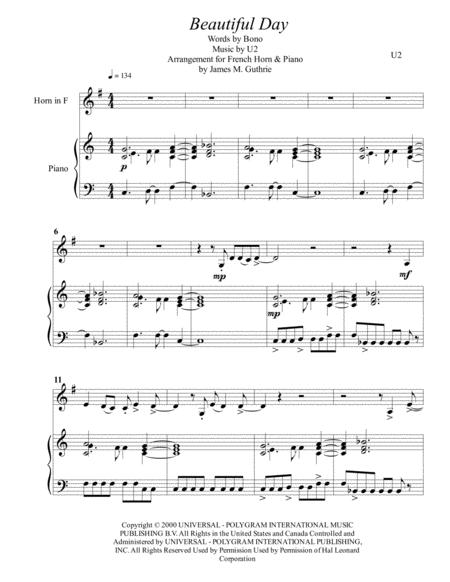 Duration: 5:15 Score: 97 measures, 8 pages, Piano part: 4 pages, solo part: 2 pages.
"Beautiful Day" is a song by Irish rock band U2. It is the first track from their 2000 album, All That You Can't Leave Behind, and it was released as the album's lead single. It was a commercial success, helping launch the album to multi-platinum status, and is one of U2's biggest hits to date.
Like many tracks from All That You Can't Leave Behind, "Beautiful Day" harkens back to the group's past sound. The tone of the Edge's guitar was a subject of debate amongst the band members, as they disagreed on whether he should use a sound similar to that from their early career in the 1980s. Lead singer Bono explained that the upbeat track is about losing everything but still finding joy in what one has.
The song received positive reviews, and it became their fourth number one single in the United Kingdom and their first number one in the Netherlands. It also reached the top of the charts in Australia, Canada, Finland, their native Ireland, Italy, Norway and Spain. The song peaked at number 21 in the United States, the band's highest position since "Discothèque" in 1997.
In 2001, the song won three Grammy Awards for Song of the Year, Record of the Year, and Best Rock Performance by a Duo or Group with Vocal. The group has played "Beautiful Day" at every one of their concerts since the song's 2001 live debut on the Elevation Tour.
"Beautiful Day" finished in fourth place on the "Best Singles" list from The Village Voice's 2000 Pazz & Jop critics' poll.[19] The song won three Grammy Awards in 2001—Record of the Year, Song of the Year, and Best Rock Performance by a Duo or Group with Vocal.[20] In 2003, a special edition issue of Q, titled "1001 Best Songs Ever", placed "Beautiful Day" at number 747 on its list of the greatest songs.[21] In 2005, Blender ranked the song at number 63 on its list of "The 500 Greatest Songs Since You Were Born".[3] The Labour Party subsequently made extensive use of the song during its successful re election campaign in 2005, though an unresolved dispute with and within the band prevented it being used in party political broadcasts.[22] In 2009, in an end of decade rankings list, Rolling Stone listed "Beautiful Day" as the ninth-best song and readers ranked it as the third-best single for the decade of the 2000s.[23] In 2010, Rolling Stone updated its list of "The 500 Greatest Songs of All Time" and placed
"Beautiful Day" at number 345, making it one of eight U2 songs on the list.[24] In 2011, VH1 listed "Beautiful Day" at number 15 on its list of The 100 Greatest Songs of '00s.[25] A version of the song was used as the theme tune to the ITV football highlights television show The Premiership, broadcast from 2001 to 2004.[26] Kurt Nilsen, the Norwegian Idol winner sang it during the World Idol competition[27] on 25 December 2003 and won the competition with the song. This was the only World Idol title and was not repeated in consequent years.
In 2004, Sanctus Real recorded a version on the album In the Name of Love: Artists United for Africa. In 2007, the German guitarist Axel Rudi Pell recorded his version on his album Diamonds Unlocked. In 2008, the song was chosen to play over the end titles of the children's film Nim's Island, starring Abigail Breslin, Jodie Foster and Gerard Butler. The song was also played after John Kerry gave his acceptance speech at the 2004 Democratic National Convention in July 2004.
In 2010, a cover of "Beautiful Day" was released by Lee DeWyze as his first single following his victory in the ninth season of American Idol. DeWyze commented "I like that song a lot (...) Is it something that is necessarily in my genre? No. There were songs on the table, and I went with the one I thought would represent the moment the best."[28] The cover reached number 24 on the US Billboard Hot 100[29] and number 13 on the Canadian Hot 100. "Beautiful Day" was also covered by 2010 X Factor Australia winner Altiyan Childs for his self-titled debut album." Wikipedia