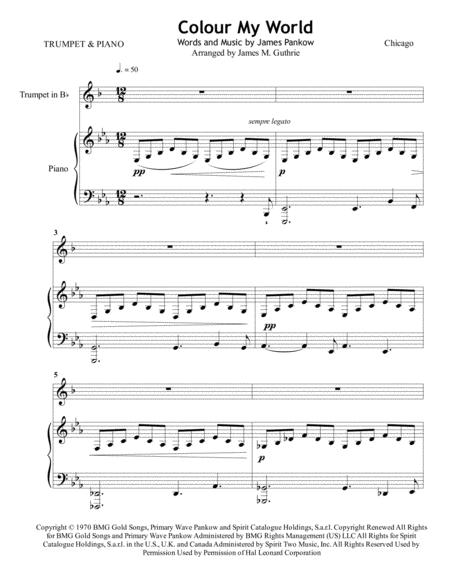 Duration: 3:04 Score: 38 measures in 12/8 at dotted quarter = 50, 6 pages, solo part: 1 page, piano part: 3 pages. Suitable for performance in recital, church or small combo. "Colour My World was written by American musician James Pankow, one of the founding members of the rock/jazz fusion band Chicago. Part of Pankow's "Ballet for a Girl in Buchannon" song cycle/suite, it was recorded for their second album Chicago, also called Chicago II (1970). Terry Kath sings the lead vocal, and Walter Parazaider performs the highly recognizable flute solo.
The song was brought to Acuff-Rose Music in Nashville as a simple 5 chord song with lyric line. A&R Tech Earl Knosher then expanded and arranged the progression, adding the colorful major 7th and 9th chords that make the song so unique. In fact, the major seventh chord that begins the song has been called, "the most famous major seventh chord in the history of music." Mr. Knosher also arranged the flute solo and played piano on the first demo of the song.
The song was initially released as the B-side to "Make Me Smile" in March 1970. It was re-released in June 1971 as the B-side to the re-release of "Beginnings"; this second single reached #7 on the U.S. Billboard Hot 100.
"Colour My World" became a popular "slow dance" song at high school proms and university dances during the 1970s.
Chicago continues to perform the song, either on its own, or as part of the Ballet. Since Kath's death in 1978 and being brought back into their set list in 1982, lead vocals were performed by Bill Champlin until 1991, when Robert Lamm took the lead. It has been sung by trumpeter Lee Loughnane since 2009." Wikipedia