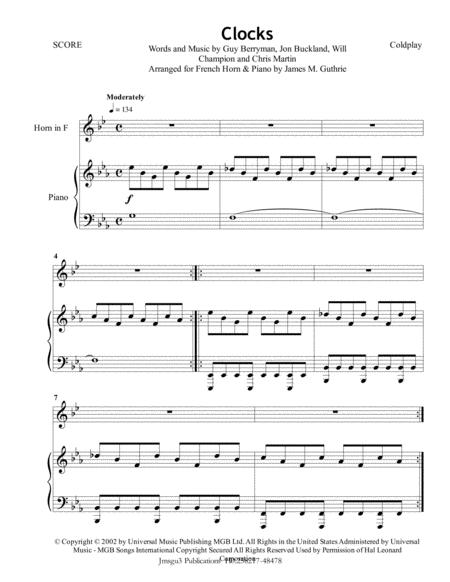 Score: 12 pages, solo part: 2 pages, piano part: 5 pages, Duration: 4:28. Suitable for Recitals, Church or nightclub performance.
"Clocks" is a song by British rock band Coldplay. It was written and composed, as a collaboration between all the members of the band, for their second album A Rush of Blood to the Head. Built around a piano riff, the song features cryptic lyrics concerning themes of contrast and urgency. Several remixes of the track exist and its riff has been widely sampled.
"Clocks" debuted to critical and commercial success, with critics mainly commenting on the song's piano melody. It was released in the United Kingdom as the third single from A Rush of Blood to the Head, where it reached number nine in the UK Singles Chart. It was released in the United States as the album's second single, it reached number 29 on the Billboard Hot 100 and number 9 on the Billboard Modern Rock Tracks chart. It won the Grammy Award for Record of the Year.
Coldplay released "Clocks" in Europe on 24 March 2003 as the album's third single. The single was issued with two B-sides: "Animals", which was one of the band's favourite songs performed on tour but was not included in the album, and "Crests of Waves". The single's cover, created by Sølve Sundsbø—as with the album and its other singles—is a portrayal of Chris Martin.[8] Across the United States, while preparing "The Scientist" as the album's second release, Coldplay's US label felt the song failed to "provide enough of a blood rush for American listeners"; instead, they released "Clocks" as the second single in the US.[9]
A music video was filmed in support of the song. It was directed by British film-maker Dominic Leung, and shot at Docklands' ExCeL Building in London.[8] It features the band performing the song, with a laser show, in front of a staged audience, mostly local college students. Stage effects and blue-red light transitions give the video a surreal feel, while a stoic crowd makes up the audience.
"Clocks" has been regarded as one of the finest achievements of Coldplay;[20] the song's piano progression remains the band's signature creation.[21] According to The New York Times, the opening piano arpeggios of "Clocks" have been widely sampled.[6] Also, many of the songs in X&Y feature influences from "Clocks". Brian Cohen of Billboard magazine noted that "Clocks" served as a "launching pad" for songs featured in X&Y, "several of which echo that track either in structure or feel."[22] "Speed of Sound", the first single from Coldplay's third album, X&Y, is similar to "Clocks",[21][23] in that the two songs have the same descending chord progression. According to The New York Times, American singer Jordin Sparks's 2008 single "No Air" "breathes life into the overfamiliar piano line" from "Clocks".[24] The song "Should I Go" by American singer Brandy, from her album Afrodisiac, samples the piano riff of "Clocks",[25] as does Mexican singer Alejandro Fernández's 2007 single "Te Voy A Perder". In 2009, French DJ David Guetta in collaboration with Kelly Rowland released the song "When Love Takes Over", which has a piano introduction like that of "Clocks". A riff similar to "Clocks" was also used for the 2009 song "Shining Down" by Chicagoan hip-hop artist Lupe Fiasco and featuring Matthew Santos. An analogous riff can also be heard in the DJ Cahill Remix of the Agnes song I Need You Now. Rolling Stone ranked "Clocks" #490 of the 500 Greatest Songs of All Time in 2010."]