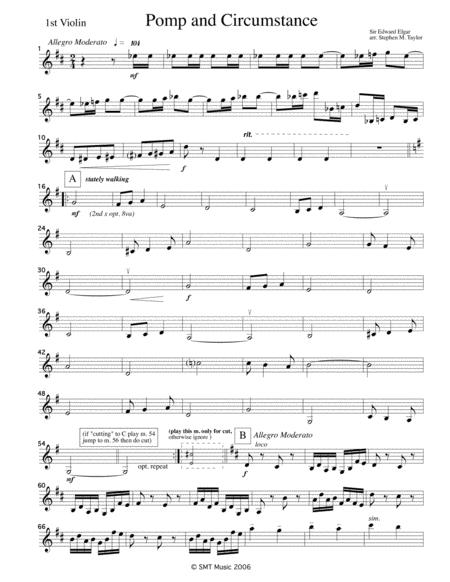 Sir Edward Elgar composed a series of Marches around 1901 and the No. 1 is the best known.

The Trio contains the tune known as "Land of Hope and Glory" which is the tune so well known used in graduation ceremonies.  The history can be found with some research. It is interesting.   My arrangement is for string quartet and works functionally well for long processions in that I incorporated a quick modulatory key change to set up the cut so that the tune is not interrupted and also so that the players don't fall asleep repeating over and over. If the cut is not taken then the one measure modulation is not played and the piece goes along as written. Great for graduations, or just as background music for a party.

The Trio section of March No. 1, directed by Sir Edward Elgar on the opening of EMI's Abbey Road Studios on 12 November 1931.

In the United States, the Trio section "Land of Hope and Glory" of March No. 1 is often known simply as "Pomp and Circumstance" or as "The Graduation March" and is played as theprocessional tune at virtually all high school and some college graduation ceremonies.[9] It was first played at such a ceremony on 28 June 1905, at Yale University, where the Professor of Music Samuel Sanford had invited his friend Elgar to attend commencement and receive an honorary doctorate of music.