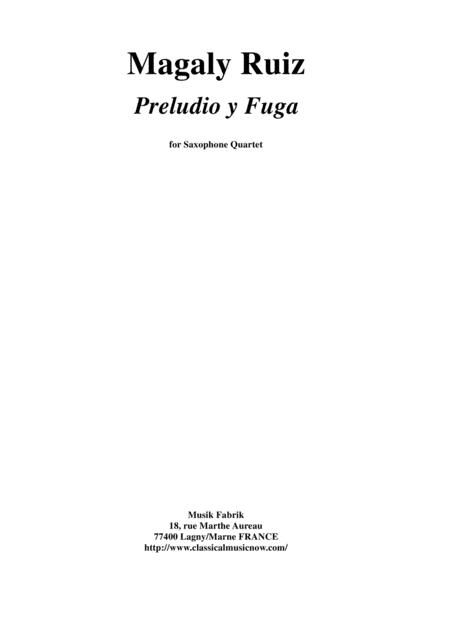 This piece for SATB saxophone quartet uses both a classical prelude and fugue form and elements of Cuban folk music.  Doris Magaly Ruiz Lastres was born in Santa Clara, Cuba, in 1941 . In 1981 she graduated with a degree in Composition from the Instituto Superior de Arte de La Habana, where she studied with Harold Gramatges, CÉsar PÉrez Sentenat, JosÉ ArdÉvol, FÉlix Guerrero, Alfredo Diez Nieto, Dolores Torres and Roberto Valera.

Since then, she has worked as a Professor at the Instituto as well as at the Instituto Superior PedagógicoEnrique JosÉ Varona and the provincial school of music, Amadeo Roldán. She has been worked for many years as technical advisor of the subject Harmony in the Dirección Nacional de Enseñanza Artística, and technical advisor in the Centro para la Investigación y Desarrollo de la Música Cubana.

Her curriculum is published in prestigious dictionaries such as The Grove Dictionary of Music and Musicians and «Diccionario Iberoamericano de la Música».