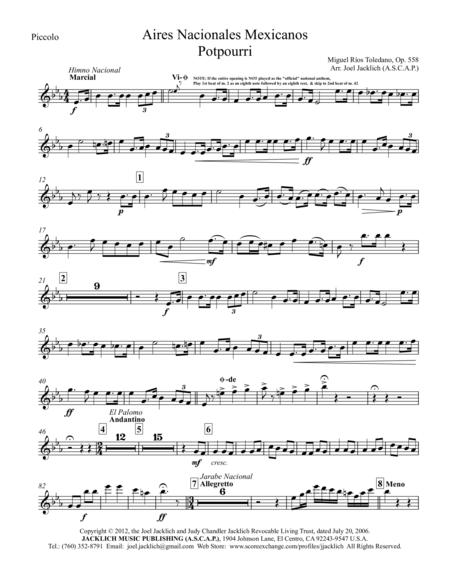 ORCHESTRAL PARTS ONLY. (Large format score published separately)Aires Nacionales Mexicanos, Op. 558, is a potpourri by the nineteenth-century Mexican bandmaster and composer Miguel Rios Toledano. It was written sometime during the presidency of Porfirio Diaz (r. 1876-1911) to whom the work was dedicated. The introduction to the twenty-five minute work (which features more than forty traditional regional songs and dances from Mexico) begins with the Himno Nacional in an instrumental version (Chorus, Stanza, Chorus). By Mexican law and custom (although this law is not applicable in the rest of the world where the Himno Nacional is considered in the public domain), in order to perform the Himno Nacional (even in this case as part of a larger orchestral work), permission must be obtained. In the second chapter of the Mexican Law on the National Arms, Flag, and Anthem (Ley sobre el Escudo, la Bandera y los Himnos Nacionales), it states that if the anthem is played outside of Mexico, Article 48 requires that the Secretary of External Relations (Secretaría de Relaciones Exteriores), through proper channels, must grant permission for the national anthem to be played and will also ensure that the anthem is performed with dignity and is not sung for commercial purposes. In the spirit of this law, and for good international relations, it is recommended that when performing the entire work, it would be good form to contact the nearest Mexican Consulate to see about obtaining permission. Should permission not be received, a cut has been indicated in the music from the first beat of measure 2 to the second beat of measure 42 to eliminate the Himno Nacional portion from the performance. At the time the work was written, the Himno Nacional was not quite so closely monitored, hence its inclusion in this work and its common accepted performance a century ago.This arrangement for full orchestra was made from an original piano version by Miguel Rios Toldano. The orchestration was made for a concert in celebration of Cinco de Mayo by the Imperial Valley Symphony on May 5, 2012.The parts are in standard letter page format (8-1/2"x11") The score (found published separatetely at SheetMusicPlus) is formatted for 11"x17" paper.