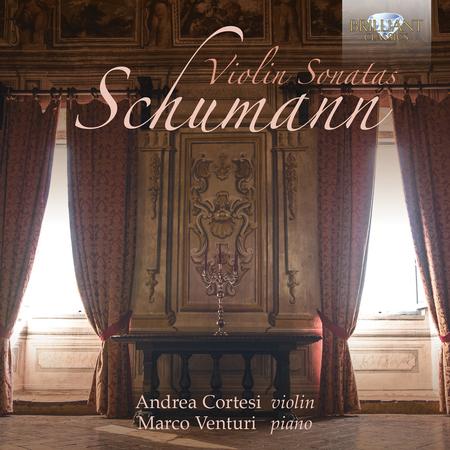 Written with typical haste in just five days - 12-16 September 1851 - and burning with the fire of inspiration, Schumann's First Violin Sonata Op.105 expresses the composer's interior tension with particular clarity, moving between the drive and doubt which he encapsulated with two mock-literary archetypes, Florestan and Eusebius. All three violin sonatas date from the years shortly before his breakdown, attempted suicide and subsequent committal to the asylum at Endenich where he spent his last days, forbidden to compose and deprived of his beloved Clara's company. That is not to say that the first two sonatas are in any way weak works, even if Schumann himself commented with the deadpan irony usually more associated with his young friend Brahms, "I don't care for the first violin sonata, so I wrote a second, which I hope has turned out better". Whatever the motivation, it is certain that Schumann, in spite of his fragile psychological condition, found creative energy to complete another impassioned chamber work in a very short time. As in the first sonata, in this work the febrile expressive and introverted language seems to escape from the typical style of the salons to a restless expression even in the slow movement, where violin and piano converse in an incessant and obsessive way. This is even more true of the densely polyphonic Third Sonata, which perhaps more than the previous two reveals the demons at Schumann's shoulder, but the composer's particular gift for the swift movement of chamber music lifts all the sonatas from the intricately circular movement which afflicts the heavier textures of other late music for larger forces such as the Mass. The pianist Marco Venturi contributes fine booklet notes to this new recording, in which he is partnered by Andrea Cortesi; this is their second recording for Brilliant Classics, following a disc which could hardly be more different in tone or aesthetic, of music by Philip Glass, Giya Kancheli and Erkki-Sven Tuur (BC94814). These wonderful violin sonatas, written a few years before his death in an asylum, belie the dictum that 'Schumann started as a genius, and ended as a talent'. These are works by a passionate genius, highly original, full of feverish energy, childlike wonder and contemplation. Included are the sonatas Op.105 and 121, as well as the posthumous sonata in A minor WoO27. Played with total commitment, in imaginative and improvisatory style, true to Schumann's flights of fancy and romantic spirit, by two Italian musicians, Andrea Cortesi and Marco Venturi, who recorded to international critical acclaim works by Kancheli, Tuur and Glass for Brilliant Classics (BC94814).