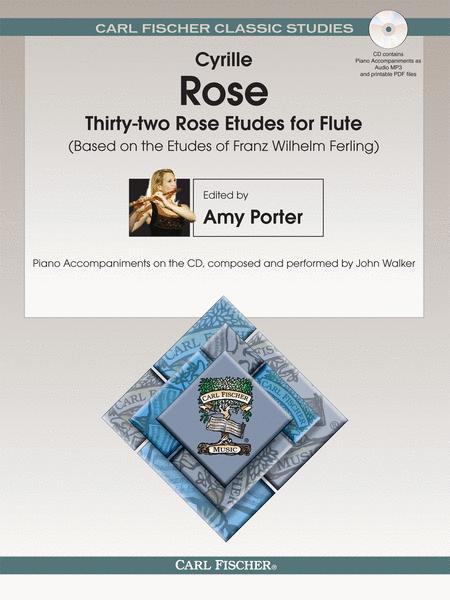 The popular 32 Rose Etudes have long been a staple in the teaching repertoire for the clarinet. Now for the fi rst time, they have been adapted for use in the study of the fl ute by prominent fl utist and professor of fl ute at the University of Michigan Amy Porter. These musical etudes have been carefully edited by Ms. Porter to fi t nicely within the range of the fl ute and help to improve the range of developing students. As an added bonus, this book comes with a CD that contains audio MP3 fi les and printable PDFs of piano accompaniments that were composed by pianist/composer John Walker to enhance the etudes and make them more pleasing to practice. These etudes are a welcome addition to the fl ute repertoire and with the included piano accompaniments the etudes can be performed on recitals or juries as well. It is something new that every serious student or teacher of the fl ute will want to have in their collection.
The Thirty-two Etudes by Cyrille Rose (1830a1903) are to clarinetists what the Twenty-six Selected Studies of Joseph Henri Altes (1826a1895) are to flutists. They are an indispensible method of wind playing for musicians to learn phrasing, to incorporate implied harmonic contrasts in solo playing, and to understand the finesse and control of the air stream. They are based largely on the Forty-eight Etudes for Oboe, Op. 31 by Franz Wilhelm Ferling (1796a1874). Rose transcribed them idiomatically for clarinet, keeping the spirit of Ferlingas etudes, but occasionally altered the key, melody, articulation and phrase markings to fit the student clarinetist. Flutist Altes and clarinetist Rose were colleagues as teachers in the Paris Conservatoire as well as alumni, Altes receiving First Prize in 1841 under the tutelage of Tulou (another flutistcomposer) and Rose in 1847 under the tutelage of KlosA(c). Their etudes were major influences on the birth and development of the then-modern Boehm-system flute and the Boehm-systeminspired Buffet clarinet. Altes wrote his Complete Method for Flute that include the twenty-six etudes as well and composed a helpful duet part for the flute teacher. For clarinetists, Rose left it to the performer to interpret the accompaniment, and a few composers have done that in modern times by producing arrangements for clarinet and piano and for clarinet duo. From the time they were written to the present day, clarinetists around the world have held these studies in high regard. They were taught during a time when music was transforming the world through opera, orchestra and ballet, and Rose wasA inspired to train the student for the orchestral working environs of the time. Written in the order of C Major, A Minor, G major, E Minor, F major, D Minor, D Major, B Minor, B? Major, G Minor, A Major, C Minor, E? Major, C Minor, E Major, B Major, and D? Major, the etudes are designed to help the performer master the inherent technical issues in each key, demanding proper intonation, phrasing and attention musical details and gestures; moreover, each key features an etude in a slow tempo and in a fast tempo. However, there are very few markings to guide the student in the style in which they should be played, so it is advised not to play them before the student is ready to play with musicality and skill. To flutists, I advise studying these etudes repeatedly and listening for the connection of the notes with the finger movement, not just concentrating on fast flute technique. Listen to the control of your airstream throughout the middle register, avoiding the common pitfalls that occur in the middle octave of the flute, such as an unfocused tone and sharp pitch. Make sure your interpretation is based on the overall arching of the phrases, not just on tempo. Breathing is also a challenge to the flutist, since many of the phrases are not evenly measured and great care is needed in choosing where to breathe. As these etudes are written for the range of the clarinet and based on the range of the oboe, I have chosen to raise the octave placement in some of the etudes to make the etudes more suited for all the octaves of the modern flute. Remember that in this music, accidentals carry through the measure.