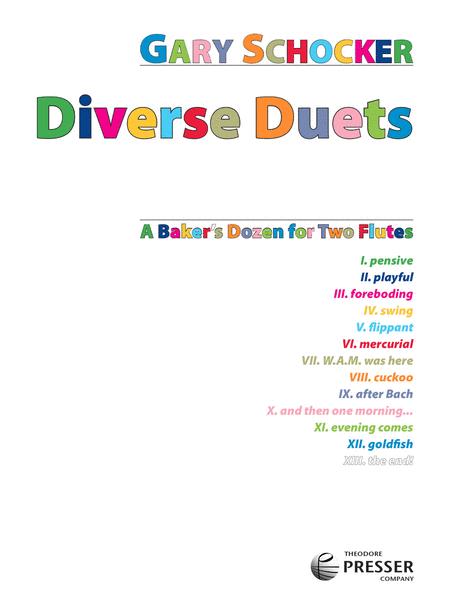 Gary Schocker's new collection of 13 flute duets runs the complete emotional gamut with pieces such as "Mercurial," "Flippant," "Forboding" and of course, "The End!" Each piece stands alone comfortably, but they may also be combined for an exciting concert program. For intermediate players. ________________________________________ Gary Schocker Flutist-composer-pianist Gary Schocker is an accomplished musician of outstanding versatility. As a flutist, Mr. Schocker has performed with many of the worlds great orchestras including performances with the New York Philharmonic and the Philadelphia Orchestra (while still in his teens), I Solisti Italiani, the Dallas Symphony, and the New Jersey Symphony. He has performed in recital throughout the United States, Australia, New Zealand, Colombia, Panama, Taiwan, Germany, France, and Canada. He is often heard in concert with guitarist Jason Vieaux. Schocker teaches many students who travel to his home base of New York City as well as in master classes throughout the world. In addition to being the most published living composer for flute, Gary Schocker has composed sonatas and chamber music for most instruments of the orchestra. He has also written several musicals and childrens musicals, including FAR FROM THE MADDING CROWD and THE AWAKENING, which can be heard on Original Cast Recordings. Far From The Madding Crowd was given its debut in Christchurch, New Zealand in 2000. In fall 2004 the show received its first fully-staged professional production at the 47th Street Theatre in New York City, as part of the first New York Musical Theater Festival. Schocker has won the International Clarinet Associations annual composition competition twice and the National Flute Associations annual Newly Published Music Award numerous times. Sir James Galway premiered his three-movement concerto GREEN PLACES at Irelands Adair Festival and has also performed the work with the New Jersey Symphony. Mr. Galway performed Schockers MUSIQUE FRANCAISE on his U.S. tour in 2002. Gary Schocker can be heard in his debut recording, REGRETS AND RESOLUTIONS, on Jonathan Digital, and on 4 highly-acclaimed CDs on the Chesky label. The 1998 Jonathan Digital recording titled AIRBORNE features his own works for flute with piano and harp. DREAMTRAVELS, on the Azica label, presents Schocker in duo with guitarist Jason Vieaux. ARIOSO, on Azica, is all baroque music featuring Schockers realizations of sonatas by Bach, LeClair, and Vivaldi. FOR DAD, also an Azica release, features original works as well as standard repertoire by Poulenc, Hindemith, Faure, and Caplet, with pianist Hugh Sung. Gary Schockers concert music may also be heard on the Koch, Troy, Sazas, Gionata, SNE, Paulinas Comep, Fleur de Son, and Innova labels, as well as the all-solo FLUTE FOREST Azica CD.