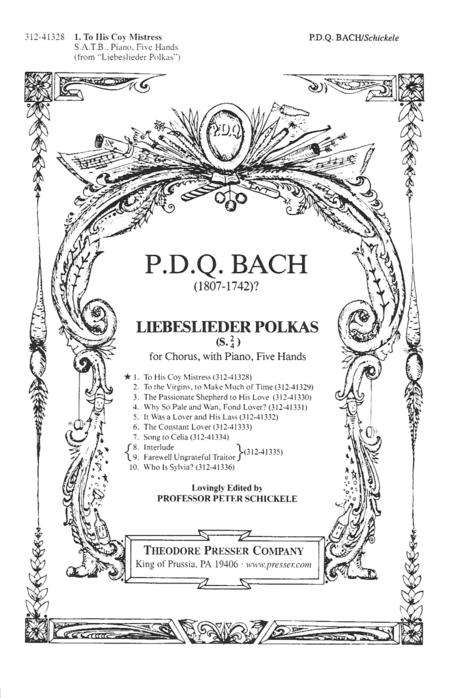 Choral Piano (5 hands), alto voice, bass voice, soprano voice, tenor voice
From "Liebeslieder Polkas (S. 2/4)" for Chorus, with Piano Five Hands. Composed by PDQ Bach (1935-). Edited by Professor Peter Schickele. -. Liebeslieder Polkas (Series 2/4) for Chorus, with Piano Five Hands, for Chorus, with Piano, Five Hands. The Liebeslieder Polkas is the first opus of P.D.Q. Bach's to be discovered in which he inflicted his music on the work of well-known poets, or even known poets, for that matter. The fact that all the poets represented are English leads one to surmise tha. Choral. Piano reduction/vocal score. With Standard notation. S 2/4/2008. 11 pages. Duration 2 minutes. Theodore Presser Company #312-41328. Published by Theodore Presser Company (PR.312413280).

The Liebeslieder Polkas is the first opus of P.D.Q. Bach's to be discovered in which he inflicted his music on the work of well-known poets, or even known poets, for that matter. The fact that all the poets represented are English leads one to surmise that P.D.Q.'s drinking companion Jonathan "Boozey" Hawkes had something to do with instigating the piece; Hawkes eventually married P.D.Q. Bach's cousin Betty-Sue Bach and returned to his native Liverpool, where the two of them spent their senility publishing most of the unmourned composer's vocal music. As far as observing the integrity of these already-famous poems is concerned, P.D.Q.'s attitude ranges from indifference to contempt. Some of the poems are set complete, others are rather haphazardly cut, some contain completely spurious interpolations, and in one case - Ben Johnson's beloved Song To Celia - the poem has been extensively rewritten to reflect the composer's besotted Weltanschauung. A word about the fifth hand in the piano part: When Brahms write his Liebeslieder Waltzes (in obvious imitation of P.D.Q. Bach, but, as usual, without giving the earlier composer any credit) he scored the accompaniment for piano four hands; by adding a third person at the piano P.D.Q. not only expanded the range of the accompaniment, but he also made sure that there was always one hand free for turning pages. Or, to look at it another way, he made life much more interesting for the page-turner.