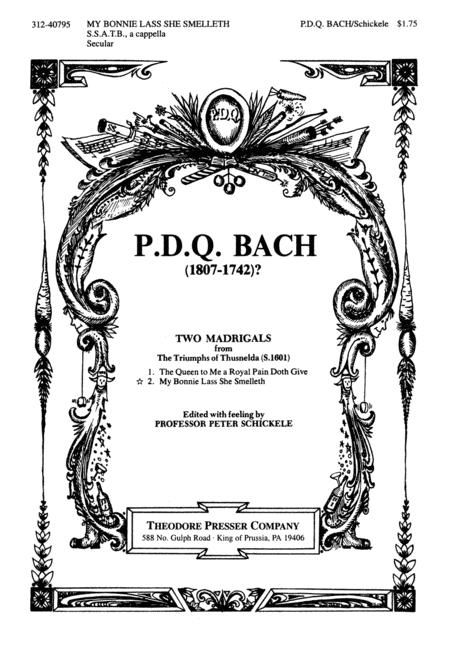 Choral soprano I, soprano II, alto voice, tenor voice, bass voice, Piano rehearsal
S.S.A.T.B. a Cappella. Composed by PDQ Bach (1935-). Edited by Peter Schickele. Fold. TWO MADRIGALS, from The Triumphs of Thusnelda. During the Golden Age of the English madrigal, around the year 1600, it was not uncommon for a number of pieces by different composers to be published together under a single title such as The Triumphs of Oriana, to name one of the most famous collections. Choral. Piano reduction/vocal score. With Standard notation. S 1601. 9 pages. Theodore Presser Company #312-40795. Published by Theodore Presser Company (PR.312407950).

My bonnie lass she smelleth, making the flowers jealouth. The hilarity continues from the very first line in this parody of the Renaissance madrigal school that includes (of all things) a scat solo for your most uninhibited bass soloist.
During the Golden Age of the English madrigal, around the year 1600, it was not uncommon for a number of pieces by different composers to be published together under a single title such as "The Triumphs of Oriana", to name one of the most famous collections. It was this practice that inspired an 18th-century nobleman, Count Pointercount, to launch a similar collection of his own as a tribute to his wife Thusnelda, a singer who had recently triumphed over earthly cares by holding a high note so long that she died of asphyxiation, complicated by a lack of sufficient oxygen. The project's hopes of success, however, grew dimmer and dimmer as, one by one, Europe's leading composers refused to contribute, each of them pointing out to the Count (with varying degree of tact) that the madrigal was dead as an art form - indeed, that it had been dead for almost two hundred years. Obviously, the only chance of getting any pieces at all in the collection lay in finding a composer who was too dumb to know what was au courant and what was passe. Thus it is that the sole contributor to "The Triumphs of Thusnelda" was P.D.Q. Bach (1807-1742)? the last and least of the great Johann Sebastian Bach, and certainly the oddest of the lot. The two madrigals, Schickele No. 1601, were written during the final period of the composer's life, the Contrition Period, when P.D.Q. was trying to make amends for the pervious twenty-nine years (The Soused Period) by writing in a style that seemed to him purer and more uplifting than the hybrid and downletting style of some of his earlier works, e.g., the Serenude and the Gross Concerto. The madrigals have been recorded by the Amateur Musica Antiqua of the University of southern North Dakota at Hoople on a Vanguard release (VSD 6536) which also contains the composer's half-act opera, "The Stoned Guest".