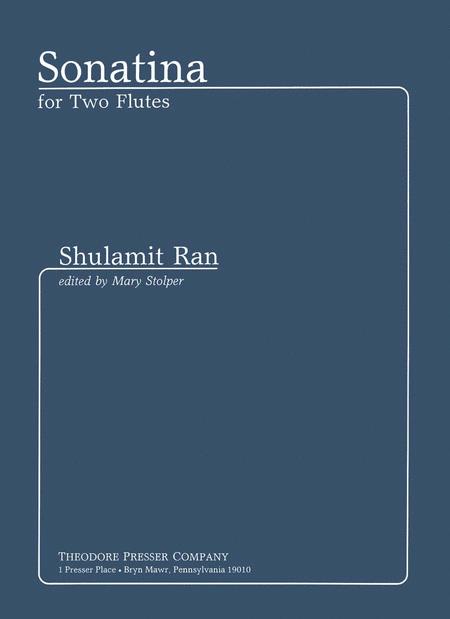 SHULAMIT RAN Shulamit Ran, winner of the 1991 Pulitzer Prize in composition, was born in Tel Aviv, Israel, where she received her early training. She came to the U.S. to study at the age of fourteen, having received scholarships from the Mannes College of Music in New York and the America Israel Cultural Foundation. Her composition teachers have included Paul Ben-Haim, Norman Dello Joio, and Ralph Shapey. Her principal piano teachers were Nadia Reisenberg and Dorothy Taubman. Among her numerous awards, fellowships, and commissions are those from the Martha Baird Rockefeller Fund, the Ford Foundation, various grants from the National Endowment for the Arts, two fellowships from the Guggenheim Foundation, the Fromm Music Foundation, the American Academy and Institute of Arts and Letters, and commissions from WFMT, Chamber Music America, Eastman School of Music, the American Composers Orchestra (for CONCERTO FOR ORCHESTRA), the Chamber Music Society of Lincoln Center (for CONCERTO DA CAMERA II), the Philadelphia Orchestra (for SYMPHONY, which later won both the 1991 Pulitzer Prize and first prize in the 1992 Kennedy Center Friedheim Awards), and many more. Rans HYPERBOLAE for piano won the competition for a set piece for all participants in the Second Artur Rubinstein International Piano Competition in Israel in 1977. EAST WIND for solo flute was commissioned by the National Flute Association for its 1988 Young Artists Competition. Her works have been performed by the New York Philharmonic, Israel Philharmonic, Chicago Symphony, Philadelphia Orchestra, Cleveland Orchestra in two U.S. tours, Jerusalem Orchestra, Orchestre de la Suisse Romande, Amsterdam Philharmonic, the American Composers Orchestra at Carnegie Hall, as well as by leading chamber ensembles around the world. In 1989 her STRING QUARTET NO. 2 (Vistas), commissioned by C. Geraldine Freund for the Taneyev String Quartet of Leningrad, received its first performance. It was the first commission given in this country to a Soviet chamber ensemble since the 1985 cultural exchange accord between the former Soviet Union and the United States. More recently, her LEGENDS for orchestra, a joint commission celebrating the centennials of both the Chicago Symphony and the University of Chicago, received its premiere by the Chicago Symphony Orchestra under Daniel Barenboim. Ms. Ran is the William H. Colvin Professor of Composition at the University of Chicago, where she has taught since 1973. In 1990 she was appointed by Maestro Barenboim to be Composer-in-Residence with the Chicago Symphony Orchestra as part of the Meet the Composer Orchestra Residencies Program. In 1994, she was appointed the fifth Brena and Lee Freeman Sr. Composer-in-Residence with the Lyric Opera of Chicago.
The SONATINA for Two Flutes was written in Tel Aviv, Israel, and represents an important moment in my life. Having begun composing at the age of seven, all my early creations involved either the piano or the human voice singing or narrating and thus could be realized in performance by me alone. When I was twelve years old, I decided the time had come to stretch out and explore instruments I did not play myself, and the SONATINA was my first such effort. Very fortunately for me, it was soon played by a number of duos in Israel, most notably by Hanoch and Sharona Tel-Oren of Israels Radio Orchestra (now the Jerusalem Orchestra), who toured with the work extensively throughout Israel. In three movements, the SONATINA illustrates the Israeli/Mediterranean style employed by many Israeli composers at the time of its composition. At a later point, I withdrew from my catalog all those works which I composed before 1968 (including several orchestral compositions and many solo and chamber pieces), because of their stylistic distance from my later music. More recently, when approached by Mary Stolper with a recording project of my chamber and solo works which include flute, I offered, hesitantly at first, to include only the last movement of this early SONATINA. A while later, Mary presented me with a most persuasive performance, in concert, of the entire work, which led to a decision to add it to five other compositions of mine spanning the period from 1969 to 1990. Marys recording of my solo and chamber music, including this SONATINA, is available on the Erato CD Mirage, 0630-12787-2. Shulamit Ran.