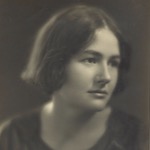 Rebecca Clarke was a pioneering concert violist, and a composer of rare distinction. Her output was small - about eighty pieces, if you exclude those she wrote as an untutored amateur - but it comprised some of the most brilliant and powerful songs and chamber works of the twentieth century. Her Sonata (1919) ranks as one of the greatest extended works for viola (and one of the finest for cello), and her Piano Trio (1921) is a masterpiece of the genre. Her works are widely performed and recorded. Gramophone called her “one of the very best [composers] of her time.” For more information about Rebecca Clarke, visit: rebeccaclarkecomposer.com.
Photo: Frank Scott Clark, Detroit, 1918.